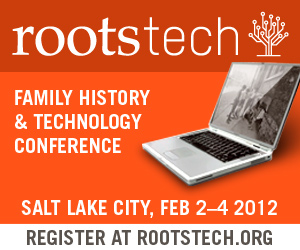 The second day of RootsTech 2012 came very quickly for me. I skipped the first session to sit at the media hub with Jill Ball and Audrey Collins to prepare for our upcoming genealogy 2.0 panel discussion. There wasn't much to do because we were just friends who were going to talk about the use of social media for genealogy.

Our session went well. People showed up. They listened. They asked questions. Only one person in the front row fell asleep, and I think that was the norm for this person. I also received a lot of positive feedback after the session and throughout the day, so we must have done something right.

I met up with other members of the California Genealogical Society (and Library) for a photo. We chatted for a while. Then I picked up some soup and took it to the media hub where I socialized with bloggers and friends who stopped by.

In the afternoon, I went to "A Report Card for the Genealogy Software Industry." I got there late, so I missed most of the grading. Apparently they scored software and its features. They didn't name any brands, but the scores weren't awesome. This session was led by FamilySearch. They were hardest on PAF. There was a lot of discussion on what genealogy software should do, and looking into the future.

The final session for the day for me was "FGS Leadership Brainstorm." This subject was an unconference last year. This year, there were triple the number of people in the room. There were representatives from societies in many states and countries including Canada and Australia. The discussion was barely structured, allowing the conversation to go where it may. A quick survey of the crowd showed that 25% felt their society membership was declining, 25% felt their's was increasing, and 50% felt their society membership was stagnant. It was an interesting observation. Lots of great discussion points to ponder. Names and email addresses were collected and notes of the session will be shared with all participants at a later date.

In the evening, I met up with some fellow genealogy ne'er do wells. We walked to the Peery Hotel and camped out in the bar where we had our own Who Do You Think You Are? watching party. If was a very fun night full of laughing and good times. I'm left wondering if that was the first time a family history show was ever broadcast in a bar instead of a sporting event. Special thanks to our server Tom and the Peery staff for tolerating us and letting us have the remote control.

After a chilly, windy walk home I called it a night and prepared for the final day.
Posted by Amy Coffin, MLIS at 9:46 AM