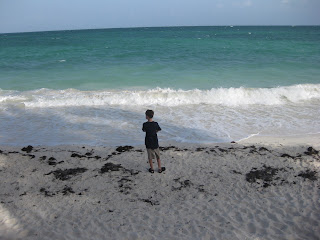 I received many thoughtful and supportive comments on my Simplifying My Genealogy Life blog post and I want to thank you for that. I did a lot of social housecleaning and priority switching. I think you might benefit from something similar, so here's an argument and path for simplifying your own online social life:

Paring down my genealogy social interaction was a wise choice on my part. Often we feel compelled to be present at every hip and popular website. Are you pinning enough? Feeling the pressure for more "likes" on your page? Worrying about Klout scores, when you don't even understand how they work?

Why? With a finite number of functional hours in each day, why worry about those things? Is it worth it?

Life is short, people, and the clock is running.

How many social networks, websites and apps do you handle each day? What do you monitor or participate in...and how much time do you devote?

Do you get anything out of it? Think before you answer. Do you check Facebook out of habit? Do you scroll and scroll through others' updates without actually reading them? Why are you skipping them? Why do you even have them in your feed if you don't read them?

The genealogy social media scene is like a giant, untamed and overgrown garden. If you try to do too much, everything gets crammed and jumbled. It's time for some pruning and maintenance.

I'm not telling you to drop everything and tune out. There's probably a lot of excess in your social media life and you don't even know it. Now we're going to take care of it. Bring your pruning shears.

Take a look at your friends list. Anyone you want to unfriend for any reason? Do it. If that is too harsh, you can always boot people from your news feed or limit what you see from them. They'll never even know.

Block games and apps you don't want to see. Stop getting mad at people for inviting you to play games. Block the games and apps yourself. You'll never see them again. Do the same for folks who send too many cat pictures, witty sayings, political statements or whatever else sticks in your craw.

Unfollow or unlike any Facebook pages you don't want to see anymore or no longer update. No need having your name associated with them.

I love Social Fixer so much. It basically gives you the power to control many of the irritating things about Facebook. I haven't seen a sponsored ad in months, and my newsfeed is always set to "most recent."

Social Fixer also lets you know who unfollows you, so get all your own unfollowing done before more people discover this handy tool.

Take inventory of all your other social media accounts, determine what you want and don't want to see from them and act on it. Pinterest, Twitter, Google+, Instagram, etc. Unfollow if necessary. It's ok. I actually unfollowed several friends on Twitter because they share the exact same information there and on Facebook. No need to read the same thing twice. Simplify is the name of the game.

Somehow I get a ton of genealogy-related sales pitches, sale flyers and such in my inbox. You probably do, too, and delete most without a look. Take an hour and unsubscribe from these things.

Also take a hard look at email discussion lists. They're handy, but they generate a lot of messages...especially where there's a debate over the definition of professionalism. It is ok to unsubscribe if you feel it is not worth the stress. Anything that makes you upset needs to go.

Social media fatigue is a real thing. It is possible to have too much information coming at you. When that happens, you miss the good stuff because you're too busy dealing with the noise. Eliminate that noise.

Simplifying your genealogy social life sounds scary, I know. It won't make you less social. Instead, it will bring you a better interactive experience and improve your social connections. I promise.

View my complete profile
Welcome to my blog, where I chronicle my own adventures in genealogy and hopefully inspire you to do the same.
Have a question? Find a common ancestor? Contact me at acoffin[at] gmail [dot] com