(This is post 10 in the Advent Calendar of Christmas Memories hosted by Geneabloggers.com)
Prompt: December 10 - Christmas Gifts
What were your favorite gifts both to receive and to give? Are there specific gift-giving traditions among your family or ancestors?
The only real tradition within my immediate family I can think of is the giving of Christmas pajamas on Christmas Eve. Every year on the 24th, my sister and I would put on our new holiday-themed jammies. Then, my mom would read our awesome pop-up version of The Night Before Christmas.
On Christmas Day, we'd go to our grandparents house. For a few years, we had a pinata. Why, I do not know because this is not of our heritage. Anyway, the grandkids (of which I was one) enjoyed the privilege of blindly swinging a big stick in the vicinity of our relatives. At some point, the candy would fall and so would an envelope. What was it? It was plane tickets for my grandmother to go see her only living brother. And once she realized that, she'd cry. But she's never really cry. She's just tear up and be speechless. It was cute.
One of the best gifts I ever received? My answer is an odd one, but it requires a back story. I did not like my husband when I first met him. I thought he was annoying, but he was in my orbit because we had the same friends. At one point, we split a 5-game package of hockey tickets. With each game he got less annoying, so you could say that the Los Angeles Kings brought us together.
On the way to those games, we'd always pass a store with a sign that said "Honey Bean Pies." I joked that it sounded like a term of endearment. At some point, the name and the joke was shortened to Bean and I haven't been Amy in this house since.
The years rolled on and we moved from an NHL town, to a no hockey town to an AHL town. In Houston, we enjoy the Aeros games where you get twice the fights at half the price. The fans wear great jerseys, too. Once I commented on how cool the Milwaukee Admirals jersey was. It was odd. It was funky. It was me.
So that Christmas, I received that very jersey from my husband: 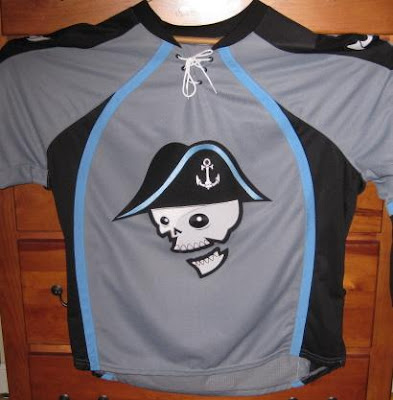 Customized with my name and the year we were married: 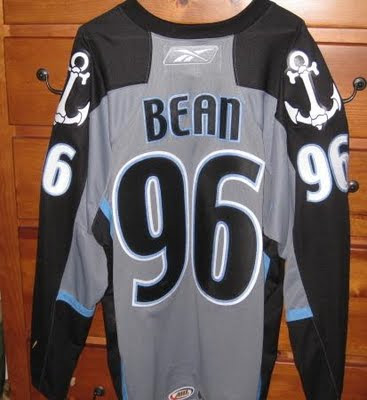 I got an engagement ring one Christmas Eve. I even got a car once. But this jersey is one of my favorite gifts ever. I don't expect anyone to understand why, but the person who gave it to me will.
Posted by Amy Coffin, MLIS at 10:01 AM