Recently I subscribed to a new genealogy database. I tested its effectiveness by entering some of my more unique surnames and places. Immediately this database returned dozens of Prohibition-era newspaper articles about my great grandfather. All of them between 1921-1926, and all of them tied him to the wrong side of the law. He was mentioned in so many articles that reporters were casually referring to him by his alias or nicknames they had given him. Illegal liquor, drugs, theft, forgery, reckless driving, fights, shooting, federal jail time, local jail time, corruption, and enough swagger to remain one step ahead of the law. The story read like a Hollywood blockbuster. Except it wasn't a movie, it was the real life of my great-grandfather.

Rabid genealogists drool over black-sheep ancestors. They make the historical hunt more interesting. They provide good stories and allow us to access interesting records. My great-grandfather was accused of and charged with many crimes in several counties. Between courthouses, newspapers and local archives, the record trail would be extensive.

I mentioned my discovery on Facebook. Family history friends openly admitted their envy. This is the genealogical equivalent of hitting the lottery. My ancestor wasn't just a black sheep, he was a one-man crime wave in spectacular fashion and it was all over the headlines. However, some of my Facebook acquaintances outside of genealogy were more shocked than excited. My family member was a criminal...and I was happy about it? I understand that reaction, too.

Here's my take on the black-sheep ancestor: I don't care to judge. I separate the actions from the person like the doctor hones in on the medical problem of the patient. The complex criminal activity is a puzzle I want to solve. I don't feel compelled to own the actions of my great-grandfather and don't feel his situation reflects poorly on me.

Everyone is different though, which is why I've treaded carefully in introducing the topic on my blog. You see, six of my great-grandfather's seven children are still alive. They range in age from 77 to 93. I feel some generational distance from my great-grandfather, but this is their dad. Furthermore, those seven children collectively gave their father dozens of grandchildren with good memories of their grandfather. The bootlegging, the shooting and minor drug use are not secrets in the family, but I have no idea who knows what about the depth of the criminal activity as it happened before they were born. How would they handle the news? Would they want to learn about it on a blog? Probably not.

There was never any doubt I would discuss this black-sheep ancestor here, but I've been thinking carefully about how to do it while considering the feelings of other descendants. Here is my intended approach:

1. This is my great-grandfather. I've written about him just like all my other ancestors and I will continue to do so.

2. I'm not revealing secrets here. All of this information has been previously published in newspapers, many with front-page headlines.

3. There are two parts to this story and I intend to research both. Almost everything I've been told about my great-grandfather was positive. My mom thought he was a very fun grandpa. I want to document that because it's just as important as the early criminal years.

4. I'm not implying my great-grandfather was a "bad ancestor." It's just a catchy blog title. Actually, I'm quite fascinated by his life story, the early choices he made all the way to his golden years. It's very important to me that the "good" parts be told because of the obvious contrast.

So now you know of my intention and plan to discuss my black sheep ancestor. Hopefully it doesn't upset anyone. From what I've gathered so far about my great-grandfather, I think he'd be thrilled to garner so much attention on my blog... 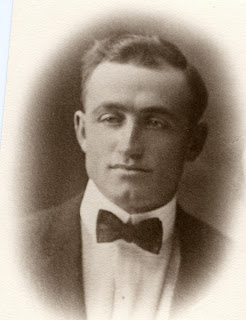 How do you discuss black-sheep ancestors on your blog?